"Generosity is my middle name."
―Rarity[src]

Rarity Lisa Reynolds is a fat, greedy, and racist unicorn pony who has completly cast aside her generous nature, and instead focuses on making money from her dresses. She does this by running a sweatshop driven by illegal Mexican immigrants. He is close friends with the other ponies and has his own Twitter account.

A skinny Rarity first appeared telling everyone that Applejack was eating "a shitload of apples." After Applejack put herself in a coma, she and the others went to see if she was alright.

Discord was out destroying Ponyville, and Twilight Sparkle (who failed to ask Fluttershy and Rainbow Dash for help) went over to Rarity's place to ask her to help find the Elements of Harmony.

After Twilight yelled for her to come out and help, Rarity (different voice, fatter, and greedier) lied to her by saying she can't, because she's entertaining family. However, the nosy unicorn looked through the mail slot, and saw that Rarity had over 30 illegal Mexican immigrants making her dresses. She explained that everything she does (by whipping them and showing them frightening posters that say "RARITY IS WATCHING YOU") is a silly family game (except that they're not allowed to leave), but Twilight doesn't find this to be ethical. Rarity replied by saying that Mexicans aren't real people.

Even though she was shown breaking a Mexican boy named Paco's fingers, and spitting in a glass for a Mexican teenaged girl to drink, Rarity thinks she's very nice and beautiful. When asked about payment by the girl whom she gave the glass of spit to, Rarity claimed she couldn't understand her, and told her that she needs to learn to speak English properly.

Unfortunately, while she went out bringing a dress to Fluttershy (and bragged about how generous she was for doing it), she was captured by a tall, muscular, Mexican man who said that he and the other slaves were going to start a "revolución." She told him that she couldn't understand her "ghastly, taco language," so he repeated it clearly ("revolution"), much to her horror. The Mexican man then takes Rarity back into the sweatshop, where he and the other slaves beat her up.

Even though she didn't make an actual appearance, she appears in one of the flashbacks in the crowd (along with Spike, Twilight Sparkle, Applejack, Cheerilee, and Big Macintosh) that was laughing at Fluttershy after she got humiliated by Rainbow Dash and Pinkie Pie.

When Rarity was still being held captive, the slaves pulled out all of her hair, ripped off her tail, wrote the word, "PERRA" (Spanish for bitch) on her chest, and drew a picture of a penis on her head. Luckily, she was able to escape them while they were asleep. Outside of the sweatshop, which was in ruins, she saw the time reversing sonic rainboom performed by Rainbow Dash (who was actually in a coma after she was "supposedly" killed by Fluttershy).

We see that the rainboom has also made both her hair and tail grow back, since she is shown looking how she used to before the revolution. After watching Rainbow defeating Discord, and getting wiped out by his blood, she scolded Paco after he said the "s-h" word when Spike landed on him. This proves that she'll possibly became more motherly to him.

Rarity later visits Rainbow at the hospital with the others to congratulate her by saying that she was fabulous (and she's not just being generous), and felt happy that she and her friends are all together again. She is finally shown watching Applejack eat every apple in Sweet Apple Acres, being proved, once again, that she really LOVES apples.

A thin Rarity in her first appearance.

A "now-fat" Rarity is both surprised and annoyed, as Twilight Sparkle pokes her head through the mail slot. 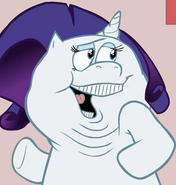 "Who do you think makes my dresses?"

Rarity's sweatshop is in ruins after the revolution.

Rarity and the others watching Rainbow Dash's epic fight with Discord.

Rarity holding on to Sweetie Belle.

Rarity and the others visit Rainbow Dash.

Rarity at the end of SWAG.MOV with her friends.
Add a photo to this gallery
Retrieved from "https://hotdiggedydemon.fandom.com/wiki/Rarity?oldid=10954"
Community content is available under CC-BY-SA unless otherwise noted.