Rainbow St. Dash is a pegasus pony who mostly likes to insult her friends, act like a jerk, and repeat her catchphrase, "Swag!" Ever since she performed a time-reversing sonic rainboom, she is currently a titan.

Rainbow Dash first appeared telling Applejack (who was eating apples like crazy) that if she eats all of the apples, she'll get a "wicked bad tummy ache." When Pinkie Pie showed up and said the same thing, Rainbow commented on that, and laughed.

After Applejack went into a coma, she and the other ponies went to see if she was alright.

While Discord was out destroying Ponyville, Rainbow was shown laying on a cloud, showing that she was too lazy to save the town.

When Twilight Sparkle asked if she could help her look for the Elements of Harmony, she replied by telling her to suck her tit, and calling her a dumb bitch. She then laughed obnoxiously, and said her catchphrase, "Swag!"

She, along with Spike and Pinkie Pie, tried to look for the Elements of Harmony in Fluttershy's shed. Not remembering about what Fluttershy said about people going in there, they entered anyway to find her shed lined with blood and slaughtered woodland creatures. Instead of noticing that, they saw that she kept a lot of "PlayPony" copies in a box, and Rainbow got a wingboner from looking at it.

Looking at the dead animal decorations, Rainbow claimed that this is what they should've expected from "some quiet bitch who spends all her time in the woods with small woodland critters."

Pinkie and Spike fled the scene when Fluttershy unexpectantly met the trio in her shed; but, unfortunately, Rainbow Dash didn't escape in time enough, and was sliced in half by the chainsaw-wielding psychopath, who then got arrested.

After that bizzare scene, Twilight Sparkle and Spike dug up her dead body, and tried to ressurect her by using the powerful shock of lightning in a Frankenstein-esque fashion, but failed (giving her an Afro, as a result).

Twilight then gave Spike a shovel, and told her to bury her again. The angry-looking Spike then decided to hit her with a shovel while procceding to take her back to the cemetary because she didn't get a birthday present for him.

It was shown that Spike never buried Rainbow Dash's body, as he was shown poking a stick at her for about an hour. Just when Spike was about to poke her again, she Unexpectedly came back to life, screaming, causing Spike to scream in fear, thus proving that the ressurection worked.... as thought as first, as she was in a coma the whole time.

After being told what she's missed over. The past few years, Rainbow then sees Twilight looking sad that she didn't save Ponyville, so she tried to cheer her up by performing a sonic rainboom, which reverses time back to the beginning of SHED.MOV, where Apple Bloom is nearly crushed.

We also see that Rainbow got her usual tomboyish mane, abs, muscles, fingers, and was the same size as Discord as well. Both Rainbow and Discord have an epic fight, but Rainbow almost loses when Discord jumps onto her back, and rips off her wings extremely. Rainbow passes out, but then looks up at a building where Scootaloo's on top, telling her to get up because she believes in her, giving her more confidence. Rainbow Dash then succeeds by bucking Discord off her back, calling for Twilight to summon the Sword of the Holy Titans, and then takes it to slice his head off.

When Rainbow shrinks to original size, she is taken to the hospital, where she is congratulated by her friends. She's a little bit bummed about losing her wings, but is happy to find out that she and her friends are all together again. She is finally shown watching Applejack eat every apple in Sweet Apple Acres, being proved, once again, that she really LOVES apples.

She was shown playing a video game called "Wolf Puncher 2" with Pinkie Pie. Spike asked why she wasn't dead, and Rainbow replied by saying, "This isn't canon." She eventually loses the game, because Pinkie forgot to tell her that she isn't supposed to let the wolf die.

Suddenly, the R-Dash 5000, barged in through the wall, shot the camera, and flew out through the ceiling. After Spike asked Trotcon if they were alright, Rainbow Dash laughed and said her catchphrase.

Rainbow Dash was still shown playing the video game, and she finally won the high score. The video game version of Sweetie Belle then popped up on screen, saying that she won the high score and that she really is a pathetic, loser, virgin. Rainbow felt annoyed, but felt releaved that nothing scary happend, like last time (until the creepy Fluttershy face that appears at the end of most of the episodes pops up).

Rainbow-Titan is Rainbow Dash's huge form in SWAG.MOV. She still has her tomboyish, rainbow mane, but is also very huge and muscular, has fingers, no tail, red eyes instead of purple, and is the same size as Discord.

She did have wings, but Discord pulled them off violently, making her bleed a lot. Just as she thought she was going to lose, she got confidence from Scootaloo, and wins by slicing Discord's head off using the Sword of the Holy Titans which, however, was summoned by Twilight Sparkle.

"I just said the same thing, you crazy cunt. Huhuhu!" 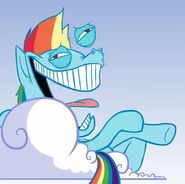 Rainbow Dash was not amused by that.

"Aw, well. At least nothing scary happened this time."

Rainbow Dash gets put in a torture chair. 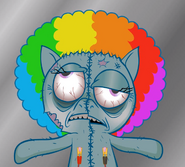 Rainbow Dash's mane becomes an Afro after getting hit by lightning.

Rainbow Dash in the SWAG.MOV preview. 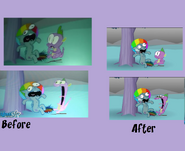 Rainbow Dash comes back to life, and frightens Spike in two different screenshots.

Rainbow Dash as Rainbow-Titan ("Leave this place, or die!").

Rainbow Dash in the hospital after defeating Discord.

Rainbow Dash with an anime face ("Hey guys, you know what I just realized.").

Rainbow Dash at the end of SWAG.MOV with her friends.
Add a photo to this gallery
Retrieved from "https://hotdiggedydemon.fandom.com/wiki/Rainbow_Dash?oldid=10894"
Community content is available under CC-BY-SA unless otherwise noted.