"My Daddy makes me put glass in my vagina."
―Pinkie Pie[src]

Pinkie Pie (born April 12,1989) is an earth pony who is pink (hence her name) and works as a prostitute that likes to throw parties a little too hard, and lives a depressing life because of this.

Pinkie Pie's life of parties started on her 23rd birthday, and she's been living it up ever since then. Ever since she had a brief fling with "Alice in Chains" guitarist, Jerry Cantrell, her partying escalated from drinking to heavy drug use, and it was shown after she went insane at the park once. It was also said that she even performed sexual acts on Big Macintosh.

Pinkie first appeared, watching Applejack eat a lot of apples. She tells her that she'll get a "wicked bad tummy-ache," and Rainbow Dash flew right next to her, telling her that she said the same thing (and laughed about it). After Applejack became unconscious, Pinkie and the other ponies checked to see if she was alright.

After Discord started to destroy the town, Pinkie Pie went to Fluttershy's shed with Rainbow Dash and Spike to search for the Elements of Harmony.

When they entered, they saw that Fluttershy has killed all of her animals, revealing that she's a psycho killer (but instead noticed that she keeps a huge stash of "PlayPony" copies in a box). When Pinkie did look at all of the rotting corpses that was hanging on the wall, she just thought that it was just "weird art."

When Fluttershy returned to her shed, and discovered that they were there, both Pinkie and Spike escaped, leaving Rainbow Dash to be killed by the insane, chainsaw-wielding pegasus. Pinkie and Spike then witnessed Fluttershy's arrest and imprisonment at the local mental hospital, where Spike asked her why things have been so weird lately. She replied by, randomly, saying, "My Daddy makes me put glass in my vagina." Spike then walked away, saying, "Yeah, well, good luck with that."

Twilight Sparkle and Spike tried to hold an intervention, which consisted of Paco, Derpy Hooves (still a toaster), Lyra, and Bon Bon, to help her with her party problems (it was also supposed to be about the Elements of Harmony, but the other main ponies couldn't be there because of their misfortunes in the previous episodes), but it didn't go as expected. For example: the drunk Pinkie threw up on Spike, insulted Twilight (by saying she has a horse's face), and said that the only friend she has is her vodka, making her pass out after drinking it. And then period blood shoots out from Pinkie's vagina shooting all over Spike, followed by "Oh god, it got in my mouth!".

It was then shown that she wrote an autobiography about the relationship with her father, Reverend Peter Daniel Pie, and put it under the title of the same line she said at the end of SHED.MOV. In an interview with Reverend Pie, it turns out that everything in the book was a complete lie. Pinkie then revealed that she lied about her father because she was trying to seek attention.

It was soon said that, in 2012, Pinkie Pie got arrested for attempting to shoplift large quantities of ammonia and psuedo-ephedrine, and is currently, once again, undergoing rehabilitaion. After stating all of this, the narrator of "True Equestria Story" reminded everyone that they should all be nice to her for being such an innocent, beautiful creature.

However, when the cameras went off, he went over, and asked what her prostitution rates were. Pinkie then told him, happily, "Ten for a tuggie, twenty for a blowy, and twenty-five if the cameraman's gonna watch."

Pinkie Pie, still drunk, was shown laying on a bed, with a snail on top of her rear end, at a Vegas-like motel. She then stopped looking low, looked at her vodka bottle, and realized that she isn't who she is right now. After pouring out the beer, she noticed that Rainbow Dash (who was actually in a coma after Fluttershy supposedly killed her) just performed a time-reversing sonic rainboom that reversed time back to SHED.MOV when Apple Bloom was about to get crushed.

After watching Rainbow defeat Discord with the Sword of the Holy Titans, she and the other main ponies visited her at the hospital, congratulating her, by saying she's "one hell of a party animal." She then asked what happened to the Elements of Harmony (finding out that they were in Spike's nose all along), and joined the group hug, feeling happy that everyone is back together again. She is finally shown watching Applejack eat every apple in Sweet Apple Acres, being proved, once again, that she really LOVES apples.

She appeared playing a video game called "Wolf Puncher 2" with Rainbow Dash (who was alive due to the whole thing being non-cannon), while Spike was giving a message to Trotcon.

She told Rainbow about how to play (except that she wasn't supposed to let the wolf die), and eagerly pumped her up when the game started. After the R-Dash 5000 shot the camera with its lasers, she, along with Spike and Rainbow, went to see if Trotcon was alright.

When Spike was shown making fun of bronies, during Fluttershy's video feed, Pinkie popped up, and asked Spike what a brony is. Spike told her that they're "people who like cartoon ponies," making her think those people were "little girls," but after he revealed that they're "adult men," she then feel disgusted.

However, she realized that it could be worse, because it's not like they're physically attracted to them. After Pinkie laughed, Spike sighed, and was about to tell her how he felt. Fluttershy couldn't take it anymore, so she frightened Spike and Pinkie with her chainsaw (making them run away).

Pinkie Pie (with a unibrow) standing next to Rainbow Dash.

Pinkie Pie and Rainbow Dash pulling a prank on Fluttershy.

"My Daddy makes me put glass in my vagina."

Pinkie Pie hanging out with Lyra and Bon Bon.

Photo of Pinkie Pie with Lyra and Bon Bon. 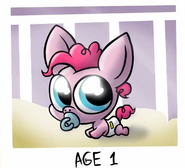 Pinkie Pie as a baby. 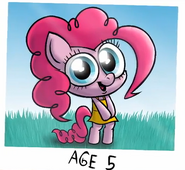 Pinkie Pie as a toddler. 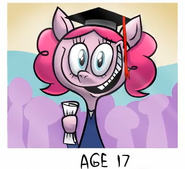 Pinkie Pie as a teenager. 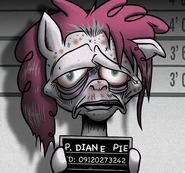 Pinkie Pie in a mugshot.

Pinkie Pie being stroked by the Dramatic-Sounding Narrator.

"That would be really creepy."

Pinkie Pie and Spike outside of the mental hospital, after escaping from Fluttershy.

A snail resting on Pinkie.

Pinkie Pie and the others watching Rainbow Dash's epic fight with Discord.

Pinkie Pie and the others visit Rainbow Dash.

"Whatever did happen to those Elements of Harmony?"

Pinkie Pie at the end of SWAG.MOV with her friends. 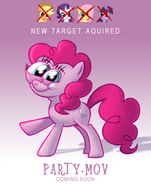 Pinkie Pie in the PARTY.MOV poster. 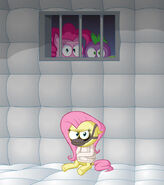 Pinkie Pie in the Hotdiggedydemon Panel Cartoon 2 poster.
Add a photo to this gallery
Retrieved from "https://hotdiggedydemon.fandom.com/wiki/Pinkie_Pie?oldid=10904"
Community content is available under CC-BY-SA unless otherwise noted.